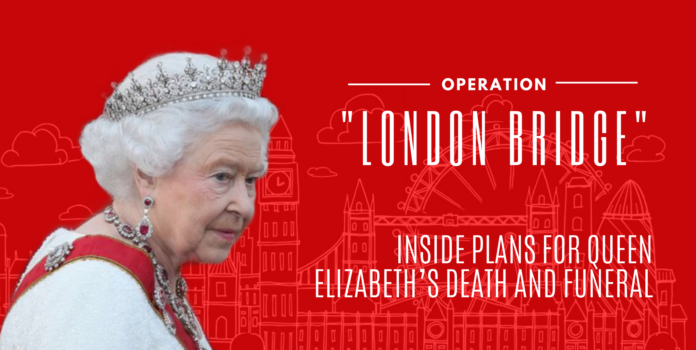 The plan for the death of Queen Elizabeth II is called “Operation London Bridge”. The plan includes a number of measures such as how to announce her death, the period of mourning that will be declared due to the Queen’s death and how the Queen’s funeral will be carried out.

The British Prime Minister and the British Foreign Office must immediately inform 15 countries, including Australia, New Zealand and Canada, and 36 Commonwealth countries of the Queen’s death. After that, the death of the British Queen will be announced globally.

Official Notice “The Queen died peacefully at Balmoral this afternoon”

The Queen’s death will be officially announced by Buckingham Palace through an announcement traditionally hung on the door of Buckingham Palace, and the news will be broadcast around the world by BBC Radio, which has traditionally held the rights to broadcast royal announcements ever since.  Additionally, according to current practices, the palace’s website and social media accounts will announce her death on a dark background and all accounts will be marked with a black banner.

“My heart has been with you all.” The plan states that no matter where the Queen dies in the world, her death should be brought to the throne room of Buckingham Palace.  If the Queen dies in a foreign country, she will be brought to London by plane No. 146 belonging to Royal Air Force No. 32 Squadron.  If she dies in Scotland or at another castle, her body will be transported by royal train to London’s Sainte-Français railway station, where the British Prime Minister will receive the body.

On the fourth day after the Queen’s death, her body will be taken to Westminster Hall, the British Parliament, in a large procession with royal military honors and will lie in state for 4 days.  In the meantime, the parliament will meet and condole the death of the queen and the accession of King Charles will be accepted by the parliament.  After that the Parliament will be adjourned for 10 days.

The day of the Queen’s funeral is designated as a day of national mourning.  At 9am that day, Big Ben will be tolled to express condolences and at 11am her body will be taken to Westminster Abbey.  There, the Queen’s body will be buried in the Royal Tombs in the grounds of Windsor Castle.